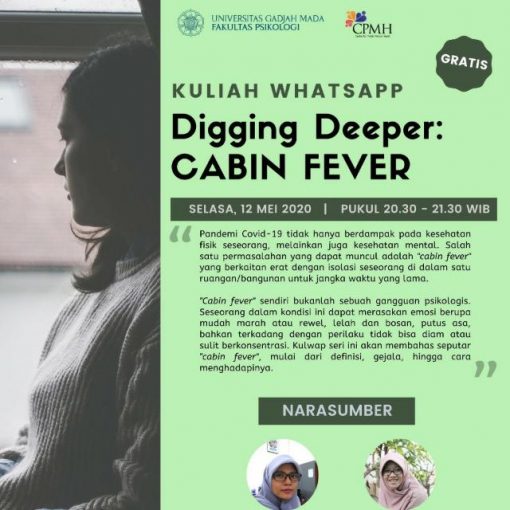 COVID-19 outbreak occur in almost every country around the world, including Indonesia. According to this situation, Indonesian government enact “Pembatasan Sosial Berskala Besar” (PSBB) policy in several province and cities, which are DKI Jakarta, Surabaya and Sidoarjo. This policy is one of the effort from government to supress direct interaction in society.

However, this policy also have negative impact such as psychological distress which possibly caused by the minimum social interaction and limited movement, that called cabin fever.

Center for Public Mental Health (CPMH) from Faculty of Psychology was conducting online class trough WhatsApp Messenger, called “Diggin Deeper: Cabin Fever”. This event was held on Tuesday, May 12, 2020 at 20.30-21.30 WIB. Participants was varied, from students and general public. Nurul Kusuma Hidayati, M.Psi., Psikolog and Wiradatul Anisa, M. Psi., Psikolog was contributing to this session as representative from CPMH.

According to the session, cabin fever described as feeling or situation that we possibly face during isolated and locked up situation in the house or cabin for a long period of time. It is not scientific or clinical diagnosis, but this term is used to describe this situation since 1800’s.

The objective of this event was to educate society about this state during this pandemic, so we can recognize the the characteristic and going to able to cope with it.

In addition, CPMH also give material and infographic about this topic and Q & A session which guided by the moderator.