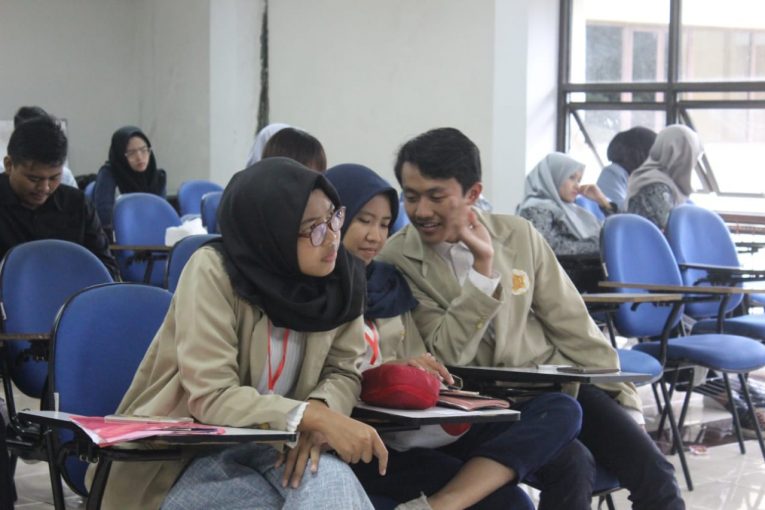 After studying here for just five months and not even a semester has passed, these three highly curious UGM Psychology students, Safira Rizky Mayla, Sinta Kartika Widyowati, dan Zaadila Muftial Mabrur decided to apply to compete in a national debate championship in Universitas Pendidikan Indonesia (UPI), Bumi Siliwangi, Bandung. This national debate championshp took the theme “Revitalization of Primary Education to Welcome 2045 Golden Indonesia (Revitalisasi Pendidikan Dasar dalam Menyongsong Indonesia Emas 2045).” This competition had several stages that participants had to go through before reaching the semifinals. The first stage was the participant selection, done through submitting essays that will be competed against too. There were various subthemes for the essay that related to the topic of education. The subtheme this team chose was “The Role of Education in Creating a Generation with Character (Peran Pendidikan dalam Menciptakan Generasi Berkarakter)”, and the essay they wrote was titled “The Collaboration Between Project-Based Learning and Conventional Schooling as an Implementation to Welcome 2045 Golden Indonesia with Strong Character (Kolaborasi Project-Based Learning dengan Sekolah Konvensional sebagai Implementasi Menyongsong Indonesia Emas Berkarakter 2045).” The essay got them fourth place in the national essay competition, thus getting them to the next stage of the debate championship. They got in, along with another UGM team consisting of more senior students, Ryanti and Nurul from our faculty and Haris from the Faculty of Forestry. It was a good thing that helped gave a boost of confidence for the team, knowing that the senior team can help them learn supervise their training. Both of the teams went to the preliminary rounds feeling optimistic that they could win. On the first round, the debate team was faced with the home team, UPI Bumi Siliwangi. The motion was “Youth Psychology as a High School Subject Can Help the Development of Teenagers (Pelajaran Psikologi Pemuda di SMA dapat Membantu Perkembangan Usia Remaja)”. The debate team wn this session and got to the semifinals. On the semifinals, the debate team faced the team from Universitas Negeri Jakarta (UNJ) with the motion “The Government Implementing Sex Education in Elementary Curriculum (Pemerintah memasukkan Pendidikan Seks di dalam Kurikulum SD)”, and ended with the win for UNJ, who beat UGM with a relatively thin margin. “Eventhough in our first competition we didn’t win, we are still grateful that we could reach the semifinals. We would definitely still compete in other national debate championships because these competitions have various benefits, like training us to think quickly and critically to find solutions in the middle of so many problems that need to be addresed. Meeting other students from other universities also helped us learn more,” said Zaadila.
Tags: achievement
We use cookies to ensure that we give you the best experience on our website. If you continue to use this site we will assume that you are happy with it.Accept