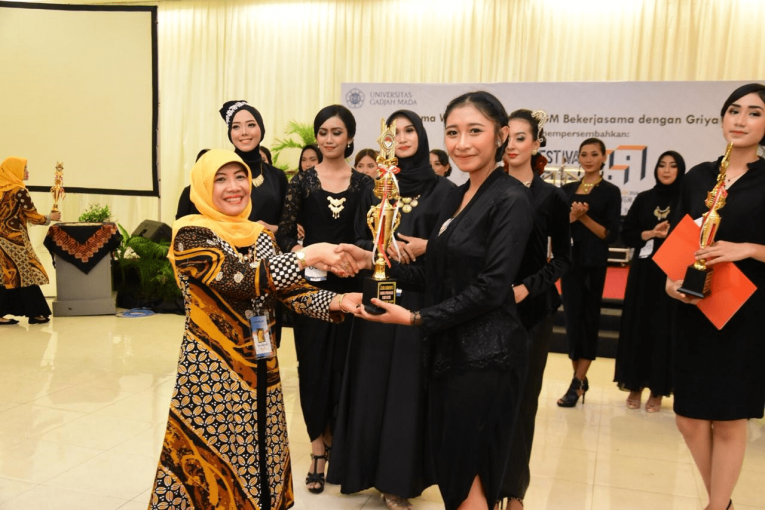 One of the events for the festival is a batik fashion show/runway contest, called Lomba Keluwesan Peragaan Kain Batik held on December 1. This event had the purpose to showcase Yogya’s unique batik prints, as well as a way to honor and celebrate batik producers in Yogyakarta. There were 19 students, who were delegates from the 19 faculties in UGM, who walked in this runway competition.There were also 19 batik entrepreneurs in the event, who came to showcase and sell the batik they made. This event was held in Grha Sabha Pramana’s 1st floor.

There were 6 rankings for winners in this fashion show and catwalk/runway competition hybrid. There were awards for 1st Winners to 6th Winners.  One of our students, Ni Putu Melinda Prabamitha Sari (Melinda) won 5th place.

The judging points were hair and makeup, costume, and of course, the walk and batik presentation. The participants were given freedom to customize their batik as long as it remained polite to Indonesian standards and colored black. They were given a 2,5 meter sheet of batik and were asked to model it with their own creativity. The batik are all handmade using natural colors, made in collaboration with Griya Batik Lestari.

This competition was the continuation of several other preparations, such as the technical meeting and the final rehearsal. The winners will then walk again in the main event, held on December 2, 2018, which will close with a Fashion Show Parade, which will be attended by the President of UGM, Prof. Ir. Panut Mulyono, M.Eng., D.Eng.

showcase the batik in their own creative ways. The batik they put on were original, traditional batik (batik tulis) colored with natural colorants. They were procured in collaboration with Griya Batik Lestari.

Tags: achievement
We use cookies to ensure that we give you the best experience on our website. If you continue to use this site we will assume that you are happy with it.Accept