ICHTI 2019, International Conference as a Response in Technology Development 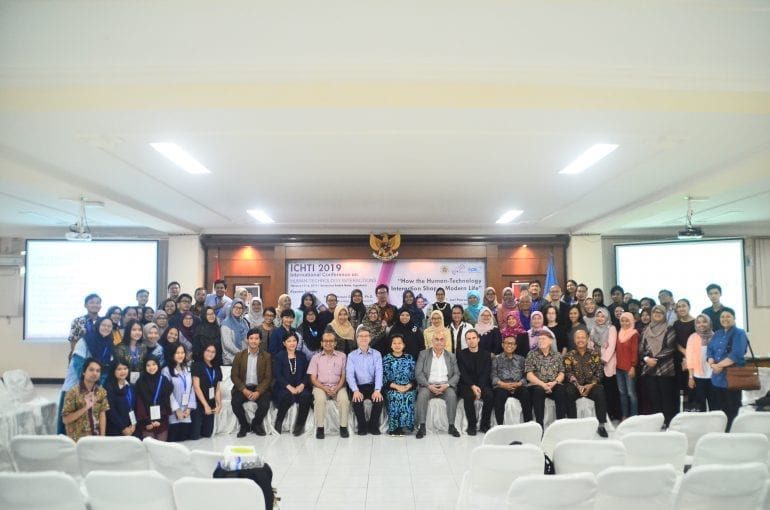 On 15-16 February 2019, Mind, Brain, and Behavior Laboratory (MBB Lab) cooperates with Doctoral Program Faculty Psychology Universitas Gadjah Mada held an International Conference in Faculty of Psychology UGM. The Conference namely ICHTI (International Conference on Human-Technology Interactions) takes the theme How the Human-Technology Interactions: Shape Modern Life. ICHTI represent the experts such as Prof. Elkhonon Goldberg, Ph. D. from New York University, Prof. Byron Good, Ph. D. from Harvard University, Prof. Joel Pearson, Ph. D from New South Wales University, dan Prof. Jeffrey Sachs from Columbia University. The participants in this conference were coming from several Institutions and Universities. Prof. Dr. Faturochman, M.A as a Dean Faculty of Psychology UGM and Galang Lufityanto, Ph.D. as a Head of Mind, Brain, and Behavior Laboratory open the event with welcome speech ICHTI. After the speech officially was opened by gamelan performance. In the first day Prof Elkhonon Goldberg, Ph. D and  Prof Joel Pearson, Ph. D becomes the first speaker in the Executive Forum. Both of them explain their view about rapid growth technology nowadays influences human behavior in daily activity. Prof. Joel Pearson, Ph.D. said that most humans nowadays do not realize about changing of the world caused by technology. At one time they worried and afraid by that changing. “If technology like the wave on the sea that can swipe whoever in front of them so we as a human in this era have no choice unless jump in technology wave”, Pearson said. Otherwise, Prof. Elkhonon Goldberg, Ph.D. sees growth of technology on the other side. This Neurology Professor said that the growth of technology influences the area of the activated brain. Based on the fact if we compared to a few decades in the usage of cell phones currently increases rapidly become 67% worldwide population. Otherwise, usage of the internet shows similar conditions, the increasing attain to 49% worldwide population. ICHTI held an oral presentation from participants for getting present their research. Presentation oral alone runs 2 days with 3 oral sessions. Participations divided into several groups spread in every room. The second day ICHTI, on Saturday 16 February 2019 also was interesting. Prof Jeffrey Sachs present with mini-seminar. As a special advisor for the UN, he stated clearly about the digital revolution: what kind of society will we create. He also an economist, so that is the reason he gave an explanation from economic sight and other aspects. The point of his explanation about digital revolution, sustainability development, dan geopolitical convergence. “technology changes every dimension in human life for instance: politic, economic, culture, education, and others”. He said. The technology shifts every material that human do before. This condition namely digitalization. He said that digital is the primary aim of technology. However, the technology that we see good or bad depends on how we use that. There is a panel session by Prof Byron Good and Dr. Neila Ramdhani, M.Si., M.Ed. Both of them take honor to discuss technology psychologically and mental health. Prof Byron Good gave high light from the psychopathology side and mental health. That was also his research result in Indonesia by involving region both Jogja and Aceh. And Dr. Neila Ramdhani spoke virtual Reality using in overcoming clinical and mental health problems such as phobia and anxiety disorder. From their explanation can be taken some point relevantly with problems in the psychology field, for instance: the mental health system in Indonesia, mental health service. The whole problems need support from many people.
Tags: conference ichti
We use cookies to ensure that we give you the best experience on our website. If you continue to use this site we will assume that you are happy with it.Accept