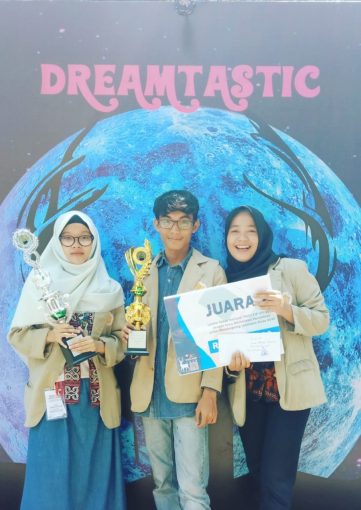 The Faculty of Psychology’s Debate Team entered the national debate competition in Universitas Pendidikan Indonesia’s Department of Primary Education, a part of the Faculty of Education. It was held in Bandung on November 29, 2o18 – December 2, 2018.

This event was held with the purpose of developing and growing creativity and sportsmanship as a device to actualize students’ potentials. The debate competition took the theme “Revitalisasi Pendidikan Dasar dalam Menyongsong Indonesia Emas 2045 (Revitalizing Primary Education in Welcoming Golden Indonesia in 2045)”.

Haris Hendrik was a delegate from the Faculty of Forestry who accompanied Rahmayanti and Nurul Hidayah, the debaters from our faculty. They won as the runner-up of this competition.

To compete in the debate, they had to be selected from the essay they submitted. UGM sent an essay with the title “Pendidikan Inklusif ‘Beasiswa 10.000’: Implementasi ‘Goodness Integrated Collaboration’ sebagai Manajemen Strategis ‘5M Movement’ dalam Upaya Mewujudkan Generasi Berkarakter ‘Memayu Hayuning Bawana’ untuk Indonesia Emas 2045 (Inclusion-based education for improving the characters of Indonesia’s next generation).” The essay got them to the next round.

With that essay, the team could continue to the first competition, going after the victory point so they could go on to the semifinals. The issue they debated on was about the implementation of entrepreneurship as a mandatory subject in higher and middle education with the purpose to encourage students to become young entrepreneurs.

In the final round, they placed as the runner-up, with a score of 19,05 while the opponent got slightly ahead with a score of 19,58. Other than that, Haris, the team leader, was awarded as the best speaker. “These kinds of events for college students are positive environments to help students think critically and be sensitive with issues going on around them. It’s also a good medium to voice your opinion and analyze issues,” Nurul said.

Tags: achievement
We use cookies to ensure that we give you the best experience on our website. If you continue to use this site we will assume that you are happy with it.Accept